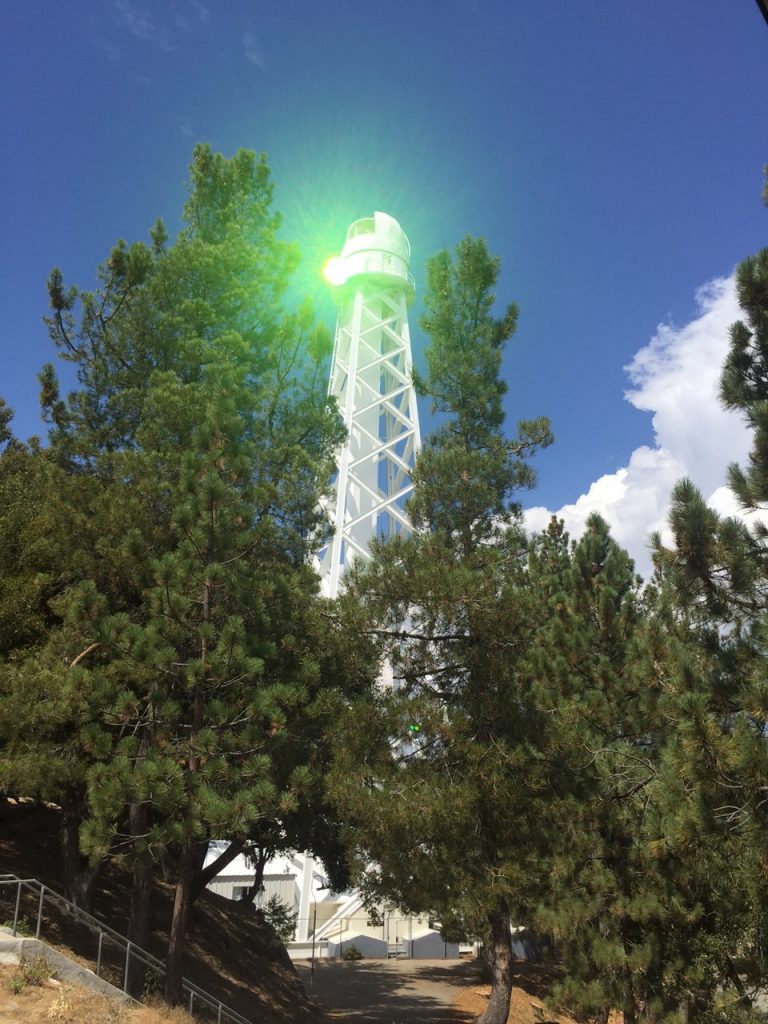 What’s that Strange Light on Top of Mount Wilson?

During the last year or so we have been asked this question many times. We have been testing a special art installation called Sunstar, created and owned by artist Liliane Lijn and astrophysicist John Vallerga. It is on loan to Mount Wilson Observatory, and can now be seen in a number of locations of a regular schedule, which is posted below. 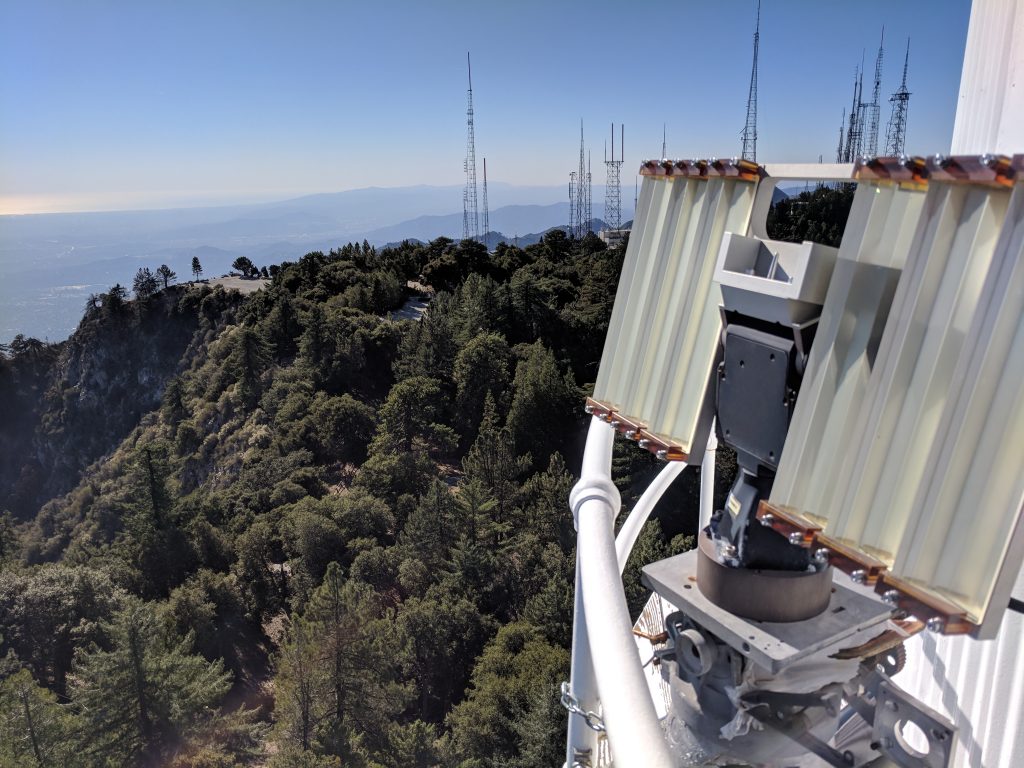 An array of six prisms, Sunstar takes incoming sunlight and refracts it, bending the light and spreading it into a spectrum–all the colors of the rainbow. It is mounted near the top of the Observatory’s 150-foot Solar Telescope Tower. With motion controls, it can be remotely directed to project the spectrum to a specific point in the Los Angeles basin. An observer below will see an intense point of light in a single wavelength, shining like a brilliant jewel from the ridgeline of Mount Wilson, 5800 feet above in the San Gabriel Mountains. The prisms can be moved to change the color of light an observer sees, or the observer can walk in one direction or another to change the color. In this case, the observer is actually walking across a giant spectrum some 250 yards long. While still very bright, at the great distances involved, it is perfectly safe to look at a single wavelength of sunlight.

Why are we doing this? For the wonder of it, the pure delight at seeing brilliant spectral colors derived directly from the Sun, the source of light that gives us life.

For the science of it. Mount Wilson Observatory was the first built specifically to do spectroscopy, to capture light from the Sun and other stars and spread it out into all its wavelengths, so that all the information it contains could be deciphered. And this art installation is useful in our STEM outreach program for local schools — it generates intrigue in the spectrum and teaches spectroscopy, a powerful tool used in almost all sciences and many industries. Students in an open area can walk through the entire spectrum.

Finally, Sunstar draws attention to Mount Wilson Observatory, and is a fitting way to celebrate our founder George Ellery Hale’s 150th anniversary. He was a solar astronomer, visionary, and institution builder, who influenced many aspects of the development of  Pasadena from the moment he selected Mount Wilson as the site for the Carnegie Institution’s Observatory.

Where to Look for Sunstar in July

A ray of pure color from the Sun will be hopscotching all around Pasadena on the 4th of July from 11 am until sunset. And then every day for a month.

If you have a view of Mount Wilson from where you are, you should be able to see the white-domed tower peeking above the ridgeline. That’s where you’ll find the light — just to the right of the tall broadcast antennae on the mountains above Pasadena.

Not everyone can see Sunstar at the same time. The beam is one tiny ray of the Sun that goes through a prism, hits a mirror, and is aimed into town. It finds you. Look up every now and then during the day and see if you can catch the colored ‘star’ shining from atop the white tower!  It will be casting its brilliant color randomly over Pasadena for a month.

The prism will be beaming daily to various sites around the Los Angeles basin — Griffith Observatory, the Rose Bowl, Pasadena City Hall, Memorial Park by the Armory, Elysian Park, the Music Center, wherever there is a view of Mount Wilson.  If you see it, please let us know what you think.

Requests to have it beam your way can often be accommodated. Email: concerts@mtwilson.edu. Include the time you’d like to see the beam and your location’s address, or geographic coordinates if you prefer. Make sure you can see the Mount Wilson ridgeline from there — just to the right of the cluster of TV towers! 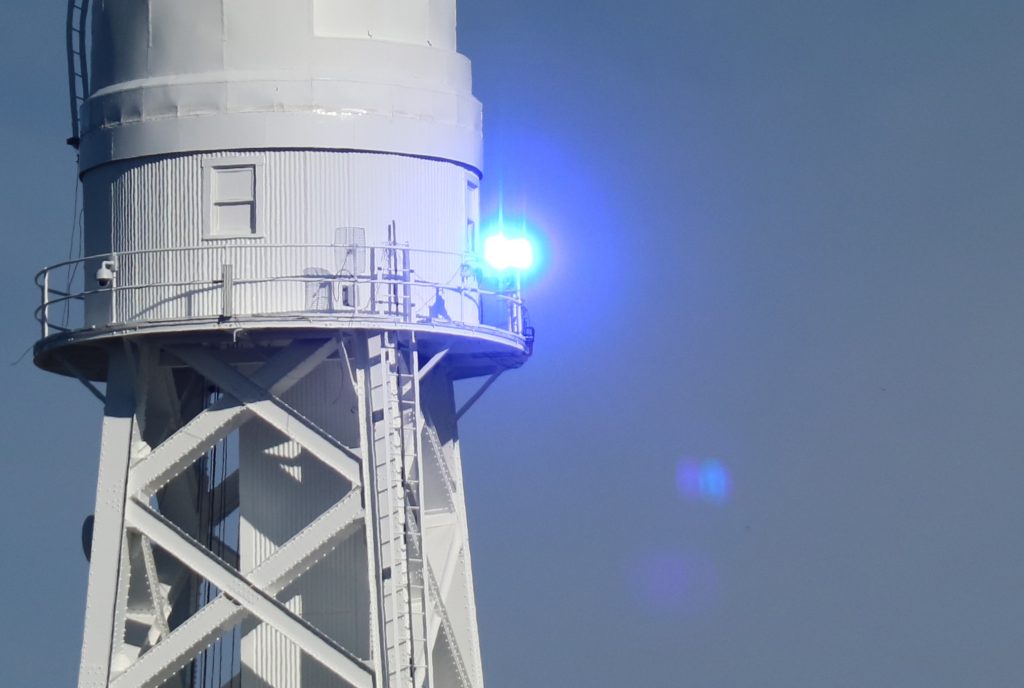 Liliane Lijn (1939) was born in New York, studied in Paris and lives in London. Internationally exhibited since the 1960s, her works are held in numerous collections including Tate London, British Museum, V&A and FNAC in Paris. Lijn works across media – kinetic sculpture, film, text, performance and collage – to explore language, mythology and the relationship between light and matter.  Recent solo and group exhibitions have been at MOMA, New York, Centre Pompidou, Paris, Museum of Fine Art, Bern.

Liliane Lijn is represented by Rodeo. For more information: http://www.lilianelijn.com/

In 2005, Lijn was ACE NASA, Leonardo Network A-i-R at the Space Sciences Laboratory at UC, Berkeley, where she began a collaboration with astronomer John Vallerga that has resulted in their Sunstar project.

John Vallerga is an astrophysicist at SSL (Space Sciences Laboratory, U.C. Berkeley). His expertise is the development of very sensitive photon detectors for NASA space astronomy missions where he has participated on projects such as the Hubble Space Telescope and the New Horizons mission currently past Pluto and on its way through the Kuiper Belt.