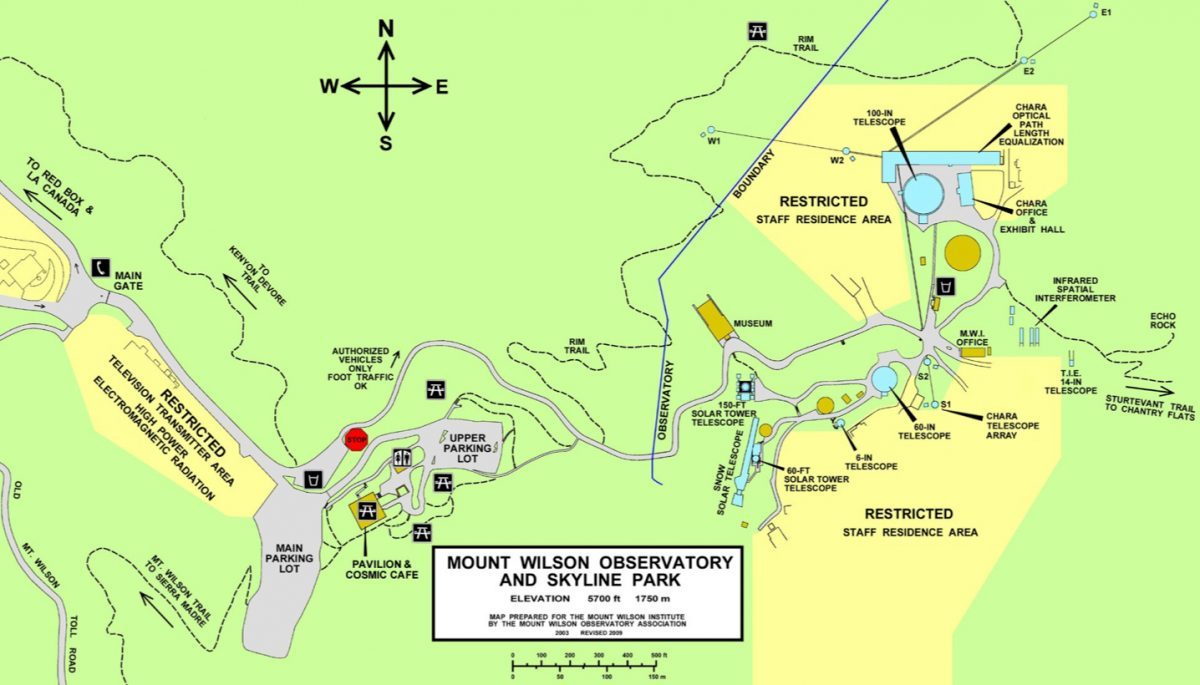 As you walk back onto the grounds, you are greeted by this sign as you get the first glimpse of the cluster of three telescopes dedicated to studying our sun.

Mount Wilson has been of interest to astronomers for over 100 years. A station of Harvard College Observatory was placed here briefly beginning in 1889. In 1903, George Ellery Hale came out from the University of Chicago, where he had already established the Yerkes Observatory. At Hale’s urging, the fledgling Carnegie Insititution of Washington established the Mount Wilson Solar Observatory as its first “department” in 1904. The name was simplified to Mount Wilson Observatory soon after the completion of the 100-inch telescope, the second of its nighttime telescopes, in 1917. The Carnegie Institution operated the facilities for more than 80 years before closing the Observatory in 1986 in favor of Carnegie’s modern facilities in the Chilean Andes. The Mount Wilson Institute, a 501(c)(3) non-profit corporation, soon stepped up to reopen Mount Wilson under an operating agreement with the Carnegie Institution.

The Observatory, located on land that is part of the Angeles National Forest, is accessed through Skyline Park, which includes rest rooms, an open air pavilion and picnic areas maintained by the U.S. Forest Service. Just to the right of the electric gate leading back to Skyline Park is the end of the Mount Wilson Toll Road. The Toll Road, widened from a foot trail, was the first road to the summit from Altadena. The Angeles Crest Highway, a National Scenic Byway, was opened in 1935 and provides access to Mount Wilson via one of the most striking drives in southern California. As you approach Skyline Park after taking the five-mile Red Box Road turnoff from the Angeles Crest Highway, you pass one of the most concentrated antenna farms in the state which serves much of the radio, television, and other broadcast needs of the Los Angeles basin.