We continue ‘Discovering Mount Wilson’ with Chapter 17, showcasing Astronomer Walter Baade (1893-1960), discoverer of stellar populations, with use of the Observatory’s 100-inch telescope.

Born and educated in Germany, astronomer Walter Baade worked at the Hamburg Observatory, in the Bergedorf borough of Hamburg before departing ‘in search of bigger telescopes.’   He arrived in the US in 1931 to join the team at Mount Wilson Observatory (MWO).

Ten years after Baade came to MWO, the United States was drawn into war with his home country after Pearl Harbor was attacked in 1941 and four days later Germany declared war on the US. Even before the US entered the war, MWO had begun participation in an in-house government supported weapons development program. As a precaution, Baade was kept from knowing what was happening with the program since he was still a German citizen.

With the United States now officially joining the allies against Germany, Baade was classified as an ‘enemy alien’ and was required to register with the US government.  His movements were restricted to Los Angeles County, with strict adherence to the Government issued curfew between 8pm and 6am.    Clearly not a workable restriction for an astronomer as this meant he couldn’t use the telescope, and was thus unable to observe during the prime night hours.

When astronomer Milton Humason heard that Baade could not continue his research due to the restrictive curfew, he stepped in to find a solution.  The work Baade was doing was too important to be sidelined and something had to be done so he went to the Provost Marshall’s office for a conversation with the Colonel in charge of enemy aliens…

Milt, as charming as ever, described some of the work he and Hubble had been working on, and invited the colonel to the mountain for an evening of stargazing.  The colonel was duly impressed by Milt’s country boy charm and listened intently as Milt explained how his absent-minded friend mis-placed his papers and then summarily forgot the issue with all the work being done advancing the scientific developments at Mount Wilson.  Baade happily swallowed his pride and let Milt do the talking.  It took all of Milt’s charm and guile to humor the colonel into acquiescing, but eventually the plan worked.  After some discussion about the hours required for his study and exception was drawn up permitting Baade to go on the mountain during regular observing periods as part of his work.  His movements would be strictly monitored, and he was only allowed access to the telescopes and the darkroom on the mountain. 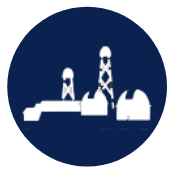 Ronald L. Voller
"The Muleskinner and the Stars"
Previous
Next

Now back at work making observations, Baade was able to define two distinct populations for stars. Population I stars are younger, show higher abundances of elements heavier than helium, and are found mostly in the spiral arms of spiral galaxies. Population II stars are older, show lower abundances for heavier elements, and are mostly found in the central bulge, halo, and globular clusters around spiral galaxies. Baade was able to see the population II stars, which had eluded Edwin Hubble, because they are much redder than population I stars. Baade’s photographic emulsions were more sensitive to red light than were Hubble’s photographic emulsions. So even though they both used the 100-inch telescope, and both looked at the same galaxies, Baade could see stars that Hubble had been unable to detect.

Baade also discovered two types of Cepheid variable stars, which are stars that pulsate radially, varying in both diameter and temperature.  They produce changes in brightness with a well-defined stable period and amplitude. With this new discovery, Baade recalculated the size of the known universe made by Edwin Hubble in 1929.  Both Hubble, in calculating the distances to galaxies, and Harlow Shapley, in his earlier determination of the size of the Milky Way, had assumed that there was a single period luminosity relationship, for all Cepheids. But in showing that there were two types of Cepheid, Baade also showed that there were two distinct period-luminosity relationships.

Be sure to check back here on October 12, when we conclude ‘Discovering Mount Wilson’ with our last chapter in the series, Chapter 18.

Sorry, the comment form is closed at this time.