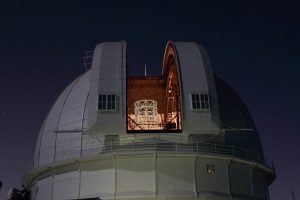 The 100-inch Telescope, with the interior dome lights turned on. Another night of observing the Universe is about to begin. Photo credit: Elisa Webster.

In the summer of 2020, Mount Wilson Observatory will have encore performances of Jeff Talman’s Cosmic Sounds inside the magnificent 100-inch Telescope dome, combined with viewing through the telescope. Stay tuned for the dates to follow, here and on the homepage.

Join us for an evening of sounds derived from the Cosmic Microwave Background and observe through the telescope that Hubble and Humason used to confirm the expansion of the Universe.

After a brief introduction to the science and art behind it, the piece will play in its entirety as dark falls. Then the sounds will accompany the viewing of celestial objects through the night. Our session directors will inform and guide.

Tickets are $100. We must limit the attendance to 40 guests per night.

All proceeds go to the maintenance and preservation of Mount Wilson Observatory.

ABOUT THE SOUND
There was sound in the primordial plasma before stars, and that sound was instrumental in shaping the stars into existence. OF SOUND BEFORE THE STARS is a kind of sonic time travel, composed with sound modeled by Mark Whittle, University of Virginia, on acoustic waveform data embedded in the Cosmic Microwave Background, which captures the first waves in the earliest time of the universe that we detect. Glissandos are interwoven, modeled from the red-shift data captured by the 100-inch telescope that proved the expansion of space. Please click here for a review of Cosmic Sounds in the LA Times.

ABOUT THE ARTIST
Sound artist Jeff Talman creates work in he intersections of art and science. He takes acoustic data from both cosmic and terrestrial phenomena transposed into hearing range and composes these into pieces harmonically tuned to the environment in which it will be played. Jeff has made installations in Cathedral Square in Cologne, Galleria Mazzini in Genow, the MIT Media Lab, Mount Wilson Observatory, Rothko Chapel, The Kitchen, St. James Cathedral in Chicago, St. Peter’s Church on Manhattan, and in the Bavarian Forest. In June 2018, two of Jeff’s installations were premiered under the skies of Mount Wilson Observatory for the sesquicentennial celebration of George Ellery Hale’s birth.